The film “Prosecutor,” tells the story of the International Criminal Court, with a focus on its first chief prosecutor, Luis Moreno-Ocampo, with lots of footage of him in the year 2009. He held that office from 2003 to 2012.

The film opens with the Prosecutor helicoptering into an African village to inform the people that the ICC is bringing its form of justice to locations all over the world, not just their village. But, of course, we all know it isn’t true, and we know now that even in read more

David Dayen is the executive editor of The American Prospect magazine. He is the author of Chain of Title: How Three Ordinary Americans Uncovered Wall Street’s Great Foreclosure Fraud, winner of the Studs and Ida Terkel Prize. His next book, Monopolized: Life in the Age of read more

UPDATE: Now included in this video is the Q&A portion.

This was an event in Charlottesville, Va., on February 28, 2020, featuring activists whose portraits have been painted by Robert Shetterly. Meeting other such activists has been a major read more

When a few thousand people were murdered on September 11, 2001, I was actually stupid enough – I kid you not – to imagine that the general public would conclude that because massive military forces, nuclear arsenals, and foreign bases had done nothing to prevent and much to provoke those crimes, the U.S. government would need to start scaling back its single biggest expense. By September 12th it was clear that the opposite course would be followed.

Since 2001, we have seen the U.S. government read more

2) Contact your nation’s government and get a clear commitment to engaging in the ceasefire (not just urging others to do so).

3) Use the Comments section on this page to report on what you learn!

Charlotte Dennett is a former Middle East reporter, investigative journalist, and attorney. She is the co-author of Thy Will Be Done: The Conquest of the Amazon: Nelson Rockefeller and Evangelism in the Age of Oil. And she is the author of the new book we read more

This event at 8 p.m. ET on April 7 is sponsored by the Dallas Peace and Justice Center, Pax Christi Dallas, Code Pink, and Veterans for Peace. It was to take place at the Peace Chapel in Dallas, Texas, but has been moved online, and the sponsors have generously made it available free to anyone anywhere.

David Swanson is an author, activist, journalist, and radio host. He is executive director of World BEYOND War and campaign coordinator for RootsAction.org. Swanson read more

I have symptoms suggestive of coronavirus: headache, sore throat, chills, lethargy, reddish eyes. I’m fine. I’m typing this normally. I’m breathing normally. I have no health issues that would make me a member of a high-risk group.

But my family and I have been staying home for over two weeks. We’ve gone outdoors only avoiding all people and people-touched objects. We haven’t gone to the store or the bank or the post office. We’ve had food delivered and cleaned read more

Watch me speak to a peace group
Watch me debate West Point's ethics professor on whether war can ever be justified More videos.

Invite me to speak.

Get free books and gear when you become a supporter. 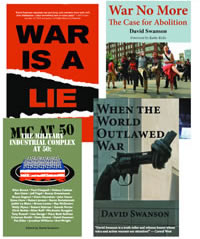 Gregory Laxer, Vietnam War resister from within active-duty Army and current member of Veterans For Peace

Financial supporters of this site can choose to be listed here.